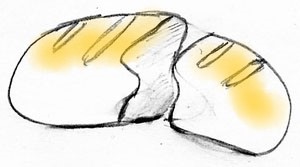 This morning I arose early and decided I would make bread.  I wanted to give some of my home-made jam and a loaf of bread to the doctor who repaired my wrist allowing me to be able to make bread, by hand, for the first time in a year.

The making of bread has always been sacred to me. There is something mystical about watching yeast bubble up, folding it into flour and then watching dough expand and grow. I have often listened to music or I would sing a chant when I bake but, because it wasn’t even 5 am I chose instead to repeat scripture and the Lord’s Prayer from Matthew 6:9b-15 (NRSV) came to mind:

9b Our Father in heaven, hallowed be your name. 10 Your kingdom come. Your will be done, on earth as it is in heaven. 11 Give us this day our daily bread. 12 And forgive us our debts, as we also have forgiven our debtors. 13 And do not bring us to the time of trial but rescue us from the evil one. 14 For if you forgive others their trespasses, your heavenly Father will also forgive you; 15 but if you do not forgive others, neither will your Father forgive your trespasses.

Along with Matthew 13:33: He told them another parable: “The kingdom of heaven is like yeast that a woman took and mixed in with three measures of flour until all of it was leavened.”

As I chanted the verses I made them my own and, in the process, I came to a quiet point, a still point of creation.  I felt the bread take form beneath my hands. Soft dough becoming elastic and springy, and rolled into a ball Then I allowed the mystery to take place as it swelled into a soft white pillow.  Taking that pillow and forming two loaves and baking them until they looked like gold was just as satisfying as any work of art. I was given a gift in the mystery of yeast, flour, milk, salt and butter. I offered the first slice of the warm bread to John, who pronounced it yummy.

I also offered my gratitude to the doctor who made it possible, I offered a prayer for the rain, soil, sun and farmers who nurtured and harvested the ingredients that went into the making.  My bread became holy, it became the Bread of Life, the Bread of Heaven.

That a woman mixes in with her flour. . .
add 3 cups of flour to the bubbling yeast and the milk mixture
beat with a heavy spoon until the batter is smooth,

And in Your Kingdom  . . .
I will do Your will . . .
add additional flour until a stiff dough forms
and the dough leaves the side of the dough

As together we create Your heaven . . .
turn the dough out onto a lightly floured surface
knead until smooth and elastic, 8 to 10 minutes.

Until all of it was growing and bubbling with love and joy.
form the dough into a ball and let it rest for 10 minutes
butter a large bowl and place the dough in the bowl
turning it so the top surface of the dough is covered in the butter
cover and set aside, in a warm place until it has risen double in size,
about 1 hour.

Give to each of us bread to sustain our lives . . .
when doubled punch down and let rise again for 45 minutes
until doubled in size.

Forgive us when we walk away from you . . .
when doubled, punch down and divide in half
and form into two loaves.
place in greased and, lightly, floured bread pans,
let rise until double, about 1 hour.

As we forgive those who in their fear and anger walk away from us . . .
when doubled bake 35 minutes at 400°F
Do not bring us into a  time of trial,  . . .
remove from oven and let cool before slicing

But deliver us from,
and teach us to do kindness for,
Those who would do us harm.
Eat one loaf and give the other away.
Now and Forever, Amen